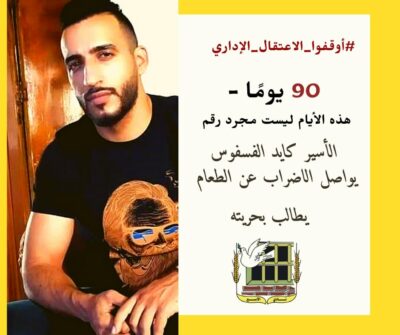 On Tuesday, the Palestinian Prisoners’ Society (PPS) has reported that a Palestinian detainee, Kayed al-Fasfous, 32, is ongoing with the hunger strike he started 90 days ago, protesting his continued arbitrary Administrative Detention in Israeli prisons without charges or trial.

The PPS stated that al-Fasfous, from Doura town, southwest of the southern West Bank city of Hebron, is determined to continue his hunger strike despite his deteriorating health condition, especially since Israeli courts are constantly denying appeals to end his imprisonment, although he is not facing any charges.

Al-Fasfous is also a former political prisoner who was abducted and imprisoned by the Israeli army several times before, including when he was taken prisoner in July 2020 and remained held since then under the arbitrary Administrative Detention orders.

The Israeli authorities are repeatedly transferring him to the hospital, then to solitary confinement in prison, an issue that is causing more exhaustion and fatigue.

Al-Fasfous, who also held a hunger strike for 12 days in the year 2019, is a married father of one daughter and has three brothers, who are all imprisoned by Israel. The three imprisoned brothers are Akram, Mahmoud, and Hafeth,

He has a Bachelor’s Degree in Computer Science and works at the local Town Council in Doura.