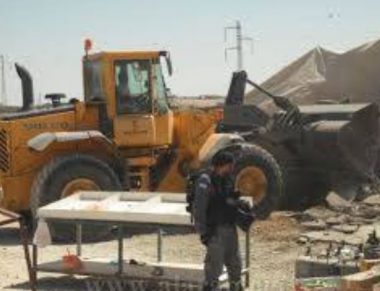 The Palestinian Government strongly condemned, on Thursday, a new Israeli military order affecting the so-called Area C, which amounts to more than 60 percent of the total area of the occupied West Bank and which is under full Israeli military and administrative control.

“This illegal development would generate more crimes against Palestinian rights of access to a safe and stable living environment and would worsen the already dire conditions of 393,000 Palestinian citizens,” the government said in a statement issued by the Prime Minister’s Office.

On May 9, the Israeli military published military order 1797 with the main objective of expediting Israel’s unlawful demolitions of Palestinian infrastructure in Area C. The new order further expands the authority of the Israeli army’s so-called “civil administration” to unilaterally target and demolish Palestinian structures within 96 hours, irrespective of the status of the underlying land or the issuing of building permits.

According to WAFA, the Palestinian government said that it consistently strives to support Palestinian citizens residing in the so-called “Area C”, which includes supporting their resilience and protection from Israeli violations. However, it said, “it is important to mention that Palestinians living under a belligerent military occupation are, under the international humanitarian law, a ‘protected population’, which obligates the occupying power to protect the occupied population. Israel has not merely neglected its duties as an occupying power, but rather has proactively and willfully done the opposite, flagrantly violating the inalienable rights of the occupied Palestinian population.”

It said that “despite of the international community’s constant rejection and condemnation of the Israeli illegal colonial practices, the new order comes as a measurement against International aid actors to prevent any legal action against future Israeli illegal orders, which has proven quite successful in preventing or delaying of the illegal demolitions until now. Therefore, Israel is using the new order to continue its unlawful demolition policies to drive Palestinian citizens away from their land and pave the way for the establishment of additional illegal colonial settlements.”

The Palestinian government urged third states, international partners and the international community at large to take concrete steps against the Israeli government to rescind the military order, which it said violates article 49 and 53 of the Fourth Geneva Convention, as well as the recent United Nations Secretary-General Antonio Guterres statement, that “forcible transfer does not necessarily require the use of physical force by authorities, but may be triggered by specific circumstances that leave individuals or communities with no choice but to leave; this is known as a coercive environment.”

In related news, the Palestinian presidency has condemned an Israeli court decision to demolish and uproot the Bedouin community of Khan al-Ahmar in the Jordan Valley, about 15 kilometers to the east of Jerusalem.

“This policy of ethnic cleansing is considered to be the worst form of racial discrimination, which has become the predominant feature of the practices and decisions of the Israeli government and its various instruments,” said the presidency in a press statement referring to the Israeli decision.

The statement continued: “The only objective of this abhorrent racist policy is to uproot the legal Palestinian citizens from their land to control it and to replace them with strange settlers.”

The presidency called upon the United Nations and the signatories to the Geneva Conventions and other international institutions to take urgent action to prevent this ‘racist’ decision and to provide international protection to the Palestinian people.

On the international spectrum, Al Ray Palestinian Media Agency reported that 76 members of the US House of Representatives signed a letter, addressed to Israeli Prime Minister Benjamin Netanyahu, demanding to stop the policy of destroying Palestinian homes in the occupied West Bank with the aim of expanding settlements.

According to Haaretz, Democratic part members of Congress called for a halt to the demolition of Palestinian houses in Susya village, Hebron.

It pointed out that US lawmakers drew conclusions from Netanyahu’s view that, while the village of Susya is becoming piles of rubble, Jewish settlements in its surroundings are flourishing and expanding.

The paper quoted a senior official of the liberal-leaning American Jewish organization, J Street, as saying that the move is considered to be, perhaps, the biggest move by Congress against the settlements.