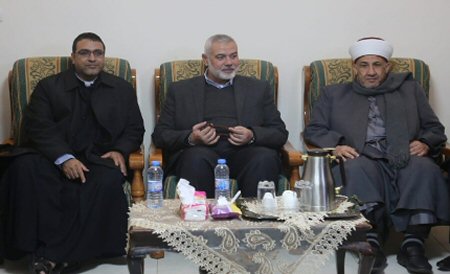 A Hamas delegation visited the Church of the Latin Monastery in Gaza, on Saturday, to express the movement’s congratulations to the Christian Palestinians.

Senior Hamas chief Ismail Haniyeh reiterated the close relationship between the Muslims and the Christians in Palestine and reaffirmed his complete solidarity with Palestinian Christians who confront the Israeli plans and schemes aimed at obliterating the Christian identity and desecrating the holy sites in Jerusalem, Nazareth, and Bethlehem.

Haniyeh has rejected Israeli attempts to pass a draft bill, in the Knesset, to seize the Christian holy sites across Palestine. He condemned Israeli attacks on the Islamic and Christian endowment, in Jerusalem and in other parts of Palestine.

“I’m proud of the high level integration between the Palestinian Christians and Muslims,” he said.

Haniyeh clarified, according to Al Ray, that Hamas, along with the Palestinian people, has no problem with Christianity or Judaism, but it struggles against the Zionist movement and occupation to the land of Palestine.