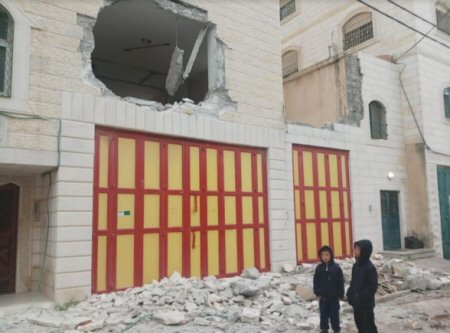 Palestinian sources reported that dozens of Israeli soldiers, along with military vehicles had escorted bulldozers and other demolition equipment which took down the family home of Irfaiya, a 29-year-old Palestinian resident of the West Bank town  Hebron, on Friday.

The Palestinian man was charged by the Jerusalem District prosecutor’s office in March with the alleged killing of 19-year-old Ori Ansbacher, an Israeli woman settler, near the city back in February.

Irfaiya was detained by Israeli forces during a raid on his home, several days after the purported killing.

PNN sources said that confrontations erupted, between local young men and Israeli troops, after the demolition, during which Israeli forces fired tear gas canisters and stun grenades towards protesters. No injuries were reported.

An Israeli court had previously rejected the family’s appeal against the demolition of the apartments.

The circumstances surrounding the murder of the Israeli woman are not clear. Ansbacher, from the settlement of Tekoa in the West Bank, was found dead in the woods, at the Ein Yael nature center, in south Jerusalem  on February 7.