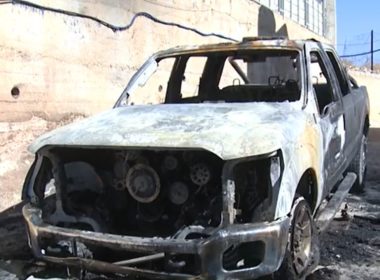 Several fanatic illegal Israeli colonialist settlers invaded, on Friday at dawn, the Taybeh and Deir Ammar villages, in the central West Bank governorate of Ramallah, and burnt a Palestinian car, in addition to writing racist graffiti and puncturing the tires of many cars.

Locals said the colonists, who came from the nearby Neria illegal colony, wrote racist graffiti, including “Death to Arabs,” “revenge,” and other slurs, on walls of many homes.

They added that the colonists also punctured the tires of five cars, in addition to writing graffiti on them.

In related news, a group of illegal colonists invaded a Palestinian olive orchard in the as-Sawiya village, south of the northern West Bank city of Nablus, and chopped more than 30 trees.