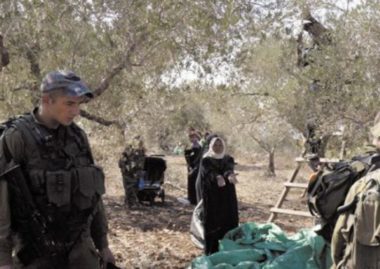 Several illegal Israeli colonialist settlers and soldiers attacked, Friday, dozens of Palestinian farmers while trying to enter their own orchards to pick their olive trees in the ash-Shu’ab area, between the villages of Burqa and Beitin, northeast of the central West Bank city of Ramallah.

The head of Burqa Village Council, Adnan Barakat, told the WAFA Palestinian News Agency that around sixteen colonists invaded the Palestinian orchards, and started assaulting them while forcing them out of their lands.

He added that the Israel soldiers were present during the attack, and fired many gas bombs at the Palestinians, causing four to suffer the severe effects of teargas inhalation before they were moved to a local clinic.

On Tuesday, the armed colonists attacked the Palestinians in the same area, and stoke their olive harvest, while the soldiers stood and watched.