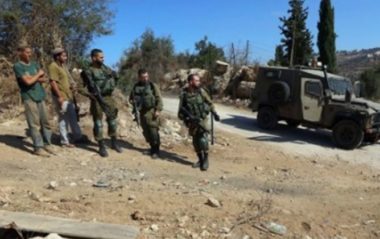 A group of illegal Israeli colonialist settlers, squatting on Palestinian lands in direct violation of International Law, bulldozed a large area of Palestinian lands near the southern West Bank city of Hebron, Tuesday, to prepare for a new segregated road.

Eyewitnesses said the colonists, accompanied by a large number of Israeli soldiers invaded and uprooted the Palestinian lands in Doura town, south of Hebron.

They added that the colonists drove large machines, including bulldozers and started uprooting the lands, owned by members of Sweity and Jadallah Palestinian families.

The colonists are apparently preparing for a new road to link with their illegal colony, Negohot, which was built on private Palestinian lands.

All of Israel’s colonies in the occupied West Bank, including those in and around East Jerusalem, are illegal under International Law, the Fourth Geneva Convention, and all related international treaties.

Article 49 of the 1949 Fourth Geneva Convention states that “The Occupying Power shall not deport or transfer parts of its own civilian population into the territory it occupies.”

In its additional Protocol, Article 85(4) of 1977 states that ““the transfer by the Occupying Power of parts of its own civilian population into the territory it occupies” is a grave breach of the Protocol.

The International Criminal Court (ICC) Statute of 1988, Article 8(2)(b)(viii) states that “the transfer, directly or indirectly, by the Occupying Power of parts of its own civilian population into the territory it occupies constitutes a war crime in international armed conflicts.”