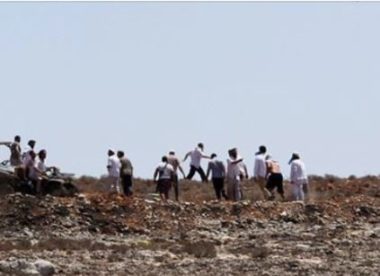 Fanatic illegal Israeli colonists attacked, on Friday evening, Palestinian villagers while picking their olive trees in their own orchards, southwest of the northern West Bank city of Nablus, wounding one man.

Media sources in Nablus said the assailants came from the illegal Gilad Zohar colony, which was built on stolen Palestinian lands.

They added that the colonists assaulted the Palestinians in Tal village, wounding a man, identified as Issa Hamed Saleh Ramadan, 55.

Medical sources said the wounded man was moved to a hospital in Nablus, suffering a fracture in his right arm.

In related news, a group of illegal settlers attacked, on Friday evening, many Palestinian cars on the main road linking between the northern West Bank districts of Qalqilia and Nablus, causing damage.

The attacks are part of ongoing violations carried out by the colonists against the Palestinians, their homes, lands and cars, and even against their holy sites in several parts of the occupied West Bank.