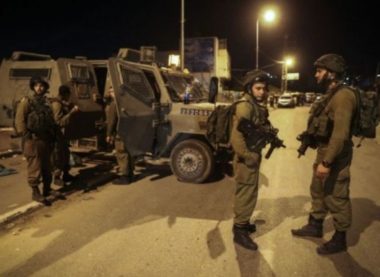 Israeli soldiers abducted, on Monday at dawn, at least nine Palestinians, including one journalist, from their homes in several parts of the occupied West Bank, after the army stormed and ransacked dozens of homes.

In Ramallah, in central West Bank, the soldiers abducted Abdullah Abu Ibrahim, from his home in Betunia town, west of the city.

The soldiers also confiscated a car, owned by Sa’ed Abu al-Baha’, from Betunia.

Furthermore, the soldiers invaded the al-Biereh city, near Ramallah, especially the al-Baloa’ neighborhood, in addition to invading Ein Misbah neighborhood and Birzeit town.

In addition, the soldiers attacked many Palestinian protesters in Surda village, northeast of Ramallah, and fired gas bombs, concussion grenades, and rubber-coated steel bullets at them.

In Tulkarem, in northern West Bank, the soldiers abducted Amir Ajaj, from his home in Saida town, north of the city.

The soldiers also abducted Sameh at-Teety from his home in the al-‘Arroub refugee camp, north of Hebron, and Ali Taleb al-Hroub from Doura town, southwest of Hebron.