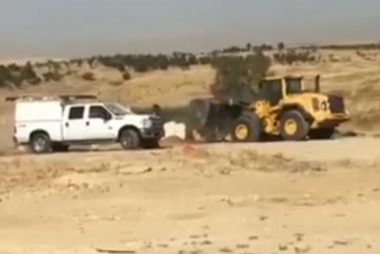 Israeli soldiers and police officers demolished, Wednesday, the at-Araqeeb village in the Negev, and demolished dozens of residential sheds and tens, for the 114th consecutive time.

Locals in the village said the invasion was carried out by the police, and employees of ‘Israel Land Authority,” before the bulldozers demolished the residential sheds, and structures.

They added that the attack was compounded due to the extreme heat in the area, especially while the residents are fasting, observing the holy Muslim month of Ramadan.

The villages in al-‘Araqeeb have been fighting an ongoing battle for recognition since the establishment of Israel in the historic land of Palestine, in 1948, although their village, and dozens of “unrecognized villages” predate Israel.

The villagers have land deeds and receipts of paid taxes dating back to Ottoman times, but the Israeli authorities do not accept these as valid.

The fate of al-Araqeeb is indicative of a wider problem in Israel, and particularly for its Bedouin community, the majority of whom live in the Negev.

Over 110,000 Bedouin live in so-called ‘unrecognized villages,’ many of which – like al-Araqeeb – significantly pre-date the state of Israel itself.

Unrecognized villages are not entitled to services that the state provides to recognized settlements, notably water and sewage services, electricity, roads and educational provision.