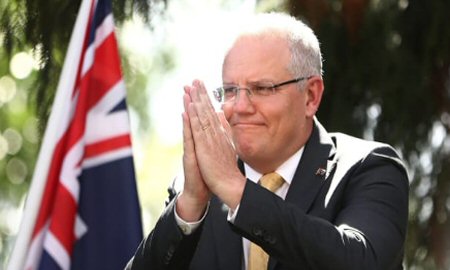 Australia’s announcement on Saturday, that it would only recognize West Jerusalem as Israel’s capital, reportedly left the Israeli occupation disappointed, according to Al Ray Palestinian Media Agency.
In his speech to Channel 10, a senior official said that the Israeli occupation was disappointed that Australia didn’t recognize the entire city as the capital of Israel.
“We’re disappointed with the Australian decision,” said the official. “Morrison only went half-way. It’s a step in the right direction, but we expected more.”
Following the announcement, Knesset Speaker Yuli Edelstein said that he was “surprised” to hear that Australia only recognized the city’s western half as Israel’s capital.
Australian Prime Minister Scott Morrison had announced, on Saturday, that Australia recognizes West Jerusalem as the capital of Israel.
“Australia recognizes West Jerusalem, the seat of the Knesset and many government institutions, as the capital of Israel,” Morrison said at a press conference.
However, Morrison stressed that the embassy would not move to West Jerusalem until a peace agreement was reached between Israeli occupation and the Palestinian Authority, but said that his government would establish an office that would deal with security and trade.
For their part, Arab League accused Australia of bias and called on the Morrison government to recognize the Palestinian state, which North America, Western Europe, Japan and several other countries refuse to do.
The criticism was blunted by one of its own members, Bahrain, which said Australia’s decision to partially follow the US position wouldn’t hurt the Palestinian cause for an independent nation.
“Australia’s stance does not impact the legitimate Palestinian demands, first among them being East Jerusalem as the capital of Palestine, and it does not contradict the Arab Peace Initiative,” Bahraini foreign minister Sheikh Khalid bin Ahmed al-Khalifa tweeted.