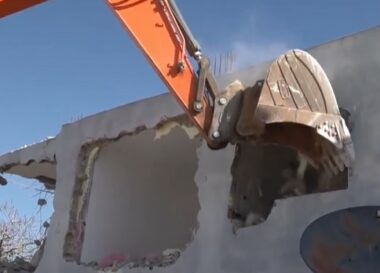 On Saturday, Israeli soldiers forced a Palestinian to demolish his home in the Ras Al-Amoud neighborhood in occupied Jerusalem, in the West Bank.

Media sources said Hussein Qunbar had to demolish his home using basic equipment to avoid the excessively-high fines and fees in addition to demolition costs if the City Council used its workers and equipment.

“I had to demolish my property by hand, piece by piece,” Qunbar told reporters, “They threatened to impose an 80.000 Shekels fine in addition to demolition costs if the city used its workers and equipment.

In a video published by the Wadi Hilweh Information Center In Silwan (Silwanic), his daughter ran to the home, asking why they must demolish the property.

The Palestinian filed many appeals trying to save the property, but the courts decided to go ahead with the demolition. Hussein lived in the home with his wife and their five children.

In an interview with Palestine TV, Qunbar said the city only gave him 21 days to demolish the property and added that the army threatened to fine him 80.000 Shekels just for the costs of the bulldozers, in addition to other costs, fines, and fees.

“I had to demolish it, and now my family has no place to go,” Hussein said, “I will have to set up a tent and live with my family, I don’t know what else to do.”