Israel Plans To “Legalize” And Provide Infrastructure For Illegal Outposts 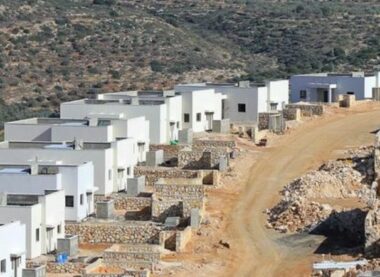 The Israeli government intends to meet within the coming few days to “legalize” and provide infrastructure for illegal colonialist outposts built on stolen Palestinian lands in the occupied West Bank.

Israeli Kan News said the government wants to discuss the efforts to “legalize” dozens of illegal colonialist outposts ahead of providing them with infrastructure.

The “legalization” attempts aim at connecting the outposts with electric grids, water, and sewage networks, in addition to infrastructure, which will also mean further annexation of private Palestinian lands.

The meetings will include various officials and representatives of several government ministries and would take place in building the “Justice Ministry.”

Several days ago, Israeli Channel Seven said a meeting is scheduled between Israel’s Interior Minister, Ayelet Shaked, with the Defense Minister, Benny Gantz, to reach an agreement on a plan that would “legalize” the outposts and provide them with infrastructure, including water and electricity.

Ayelet Shaked, a member of the right-wing Jewish Home Party, is behind various efforts to legalize outposts and provide services to them along with the already “legalized” outposts, all built on stolen Palestinian lands in the occupied West Bank, including the occupied capital, Jerusalem.