Israel To Increase Military Deployment On Gaza Border, Hamas Says It Ready For Any Scenario 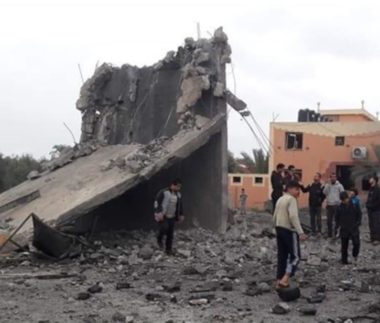 After a military and security session to evaluate the situation in the Gaza Strip, especially in the aftermath of the killing of seven Hamas fighters in an undercover offensive in Gaza, also leading to the death of one soldier, Israel has decided to significantly boost its military deployment along the border with the coastal region. Hamas said it is ready for any possible scenario, but added it is not interest in war.

The meeting took place between Israeli Army Chief of Staff, Gadi Eisenkot, and the head of the Internal Israeli Security Agency Nadav Argaman, along with senior Israeli military leaders.

Eisenkot said that the “operation the army carried out in Gaza, Sunday, carried a significant importance to Israel’s security.”

The decision was made to increase the military deployment along the Gaza border areas, and to remain in high alert in case of any deterioration on the ground.

Meanwhile, Ismael Radwan, a senior political leader of Hamas said the movement has no interest in a war with Israel, but is ready for all scenarios “in case a war was waged on Gazza.”

It is worth mentioning that the Palestinian Police and security forces in the Gaza Strip have enacted a series of security measures in all parts of the coastal enclave, and deployed hundreds of officers in addition to installing security roadblocks on many roads, in addition to searching dozens of cars.

The Ministry of Interior in Gaza called on the Palestinians to fully cooperate with the officers and security measures, and to refrain from publishing any unofficial and rumored information related to the fatal Israeli attack which took place in Khuza’a area, east of Khan Younis, in the southern part of the Gaza Strip.

On its part, the Al-Qassam Brigades, the armed wing of Hamas said it is investigating the Israeli infiltration not Gaza, and the killing seven of its fighters, including two senior leaders.

Al-Qassam added that the “criminal enemy is responsible for this serious crime, and will pay a heavy price for that.”

It also said the resistance will always remain ready, and that “the enemy will not enjoy peace and security in our homeland,” and vowed that the “blood of the slain fighters will not be spilled in vain.”

It is worth mentioning that the army fired many missiles and shells into the area, after assassinating the seven fighters, to secure the retreat of its soldiers, especially after Hamas fighters managed to kill one of the undercover soldiers.