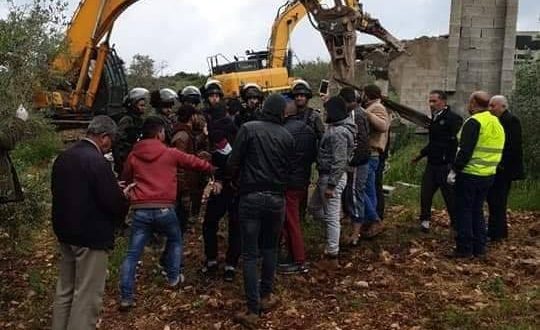 The Israeli army demolished, on Wednesday morning, three under construction buildings in the northern West Bank village of Rummaneh, west of the city of Jenin, reported WAFA correspondent.

The source said that a large Israeli force invaded the village and proceeded to destroy the three buildings that were being built near the apartheid separation barrier, and were owned by three Palestinian residents of Rummaneh village.

Confrontations erupted between the soldiers and local youths, resulting in the soldiers firing tear-gas at the youths, causing inhalation injuries.

Rummaneh residents were informed of the occupation authorities intent to demolish their homes, near the apartheid wall, under the pretext that they were building without Israeli permits, a nearly impossible task for Palestinians in the occupied West Bank. It is important to note that on Wednesday, a Palestinian-owned caravan in the Jordan Valley was seized by Israeli forces.

Also of note, Israeli forces near Tulkarem, on Tuesday, stormed greenhouses that Palestinian farmers were working in, and forced them to leave. At the same time, army bulldozers closed nearby agricultural roads with dirt mounds, blocking farmers from their land, as well as other villages in the area.