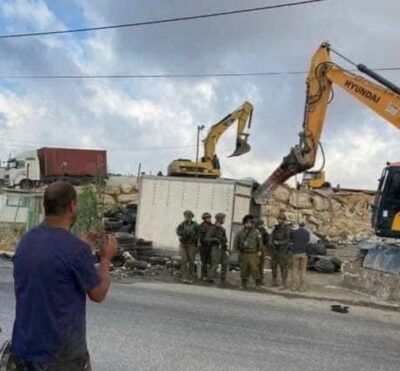 On Wednesday morning, Israeli soldiers demolished a car repair facility and a wall surrounding it near the illegal Annexation Wall in Anata town, northeast of the occupied Palestinian capital, Jerusalem, in the West Bank.

Media sources said the demolished structure and walls are owned by Salem Abu Markhiyya and added that the army is alleging the structure and the wall did not receive a permit from the City Council of occupied Jerusalem.

They added that several army jeeps and bulldozers invaded the town before isolating the area and demolishing the structures.

The soldiers also fired many gas bombs and concussion grenades at the Palestinians to force them away.

In related news, the soldiers demolished an under-construction home owned by a Palestinian political prisoner in Bil’in village, west of Ramallah in the central West Bank. The soldiers also demolished structures near occupied Jerusalem.

While Israel continues to build and expand its illegal colonies, Palestinian communities and towns in occupied Jerusalem, and various areas in the occupied West Bank, continue to be denied the right to build homes and property.