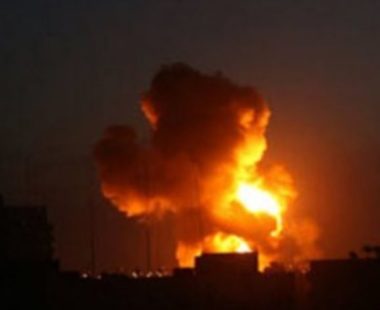 The Israeli Air Force fired, on Monday at dawn, many missiles into several areas in Khan Younis, in southern Gaza Strip, Deir al-Balah, in central Gaza, and in Gaza city, causing excessive damage, reportedly after a homemade shell was fired into the Negev.

Media sources said the army fired at least ten missiles into an area, northwest of Khan Younis city, in the southern part of the Gaza Strip, causing excessive property damage, and fire, to structures and the surrounding homes.

In addition, the army fired thee mortar shells into a site near the Shuhada graveyard, east of Gaza Strip, causing damage. There have been no reports of civilian casualties.

The Israeli army said it was retaliating to one shell that was reportedly fired from Gaza into an area in the northern Negev, causing no damage or injuries.