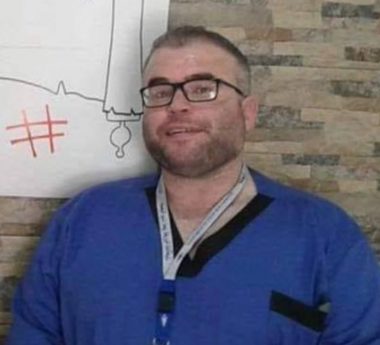 Israeli soldiers killed a Palestinian man on Monday near the entrance of Beit Ummar town, north of the southern West Bank city of Hebron, after the army claimed that he “deliberately rammed soldiers with his car”, wounding three.

Abu Yabis is a nurse who worked at Bethlehem Arab Society for Rehabilitation, in Beit Jala city, north of Bethlehem.

Israeli sources said one soldier suffered a moderate wound, and two others were mildly injured, in what the army called a “deliberate car ramming attack,” before the army shot and killed the driver.

In a statement, the army said the incident took place on Route 60, in an area where road work is taking place, and added that the soldiers were moved to an Israeli hospital for treatment.

The PRCS stated that one of its ambulance rushed to the scene before its medics started providing treatment to Ramzi Abu Yabis, and tried to move him to a hospital, but the army stopped their ambulance. An Israeli soldier looked at a cardiograph machine hooked to the Palestinian, and said, “He is dead, we are taking his body.”  The soldiers then took the severely wounded man from the ambulance, placed his corpse in a black bag, and took it away.

It is worth mentioning that the soldiers also asked the Palestinian medics for two neck braces, which were given to them.

Mohammad Sami al-Ja’bari, the deputy-head of the Emergency Department at the Palestinian Red Crescent Society in Hebron, told the Maan News Agency in a phone interview, that the PRCS received a call regarding a traffic accident near Beit Ummar, before the medics rushed to the scene.

“After arriving there, the medics took the wounded Palestinian out of his car, and connected him to a cardiograph machine,” Al-Ja’bari said, “But the army stopped the ambulance, and took him away – we were not informed about any Israeli injuries until the soldiers asked us for neck braces.”

The slain Palestinian is a father of two children, and was on his way to Hebron for work.

It should be noted that Israeli forces frequently miss-classify vehicle collisions between Palestinian and Israeli vehicles as ‘deliberate ramming attacks’, when many are likely accidents.