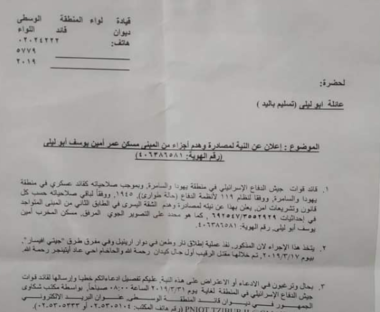 Dozens of Israeli soldiers invaded, on Tuesday at dawn, the town of az-Zawiya, west of Salfit in central West Bank, and stormed the family home of a slain young Palestinian man, before handing his parents a demolition order targeting their property.

Media sources in Salfit said the soldiers handed the parents of Omar Abu Laila, 19, a military order informing them that their home will be demolished, and that they have until March 31st to appeal the decision.

His mother said that dozens of soldiers surrounded the property before invading it, and conducted a violent search, in addition to tearing his posters and pictures, before handing them the military order.

It is worth mentioning that Omar Abu Laila was killed on March 19th, 2019, after the soldiers surrounded an old home where he was hiding, in Abwein village, north of Ramallah, in central West Bank.

After killing him, the soldiers took his corpse and never handed it back to his family. Omar was suspected of killing Rabbi Ahiad Ettinger and Staff Sgt. Gal Keidan, after he reportedly stabbed them on March 17, 2019.

The demolition of homes of Palestinians who killed Israeli soldiers or settlers, or are suspected of killing or wounding Israelis, is an illegal act of collective punishment targeting their entire families, in direct violation of various human rights agreements and International Law.