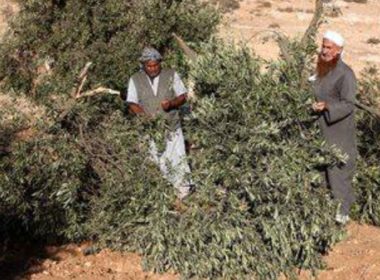 Israeli bulldozers destroyed 200 fruit trees, on Saturday, in the town of Bidya, west of Salfit, in the northern occupied West Bank, the Palestinian Information Center reported.

The uprooted fruitful trees, belonging to Salim Khalil, were a mix of olives, figs, grapes, peaches, lemons, and perennial almonds.

Khalil said that some of the trees were more than 2 decades old, the harvest being his sole source of income to provide for his family.

Israeli occupation authorities ordered, on Saturday, the expropriation of 803 dunams (198 acres) of Palestinian-owned land near Douma village, located south of Nablus in the northern occupied West Bank, according to local sources.

Official monitor of Israeli settlement activities in the area, Ghassan Daghlas, told Palestinian WAFA News Agency that the army delivered notices informing local villagers of the authorities decision to seize 803 dunams of Palestinian-owned land, under the pretext of groundwater drilling.

Israeli has escalated its attacks against the civilian population of Palestine, with a surge of home demolitions carried out by the occupation state, as seen in the OCHA and PCHR reports.