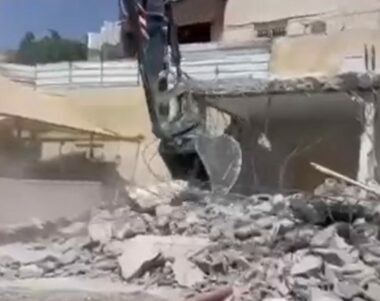 On Saturday, the Israeli authorities in the occupied capital, Jerusalem, forced a Palestinian family to demolish its home in Ras al-Amoud neighborhood in Silwan town, south of the Al-Aqsa Mosque in the city.

The Wadi Hilweh Information Center In Silwan (Silwanic) said the local Hadiya family was informed that it either demolishes its own home or face very high fines and fees if the city used its workers and equipment to destroy the property.

Silwanic added that the family tried to obtain all needed permits and filed costly appeals to save the property, built twelve years earlier, but to no avail.

Three families live in the 120-square/meter home, and the owners were recently informed that they have just a few days to demolish the property or face the consequences.

Last month, 35 Palestinian homes were demolished occupied Jerusalem, including eleven homes that the families had to self-demolish, and the army also issued five demolition orders in Silwan, al-Isawiya, and al-Walaja, in addition to issuing an order for the destruction and removal of an asphalt street linking Mikhmas town with Doweir public garden.

The Israeli authorities demolished, confiscated, or forced people to demolish 55 Palestinian-owned structures in East Jerusalem and Area C of the West Bank, citing the lack of Israeli-issued building permits; ten of the structures were funded by donors.

As a result, 61 people, including 31 children, were displaced, and the livelihoods of about 200 others were affected. Some 47 of the structures were in Area C, including seven in Al Jiftlik Ash Shuneh, in a designated ‘firing zone’ for Israeli military training, and where Palestinian communities are at risk of forcible transfer.

Eight other structures were demolished in East Jerusalem, including five destroyed by their owners to avoid paying fines imposed by Israeli authorities when they conduct the demolitions.