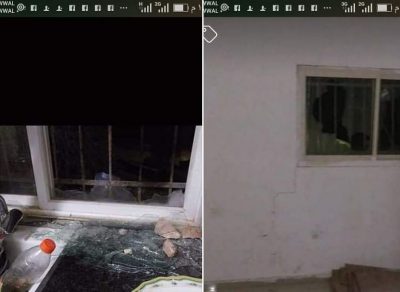 A number of illegal Israeli colonialist settlers attacked, late on Monday at night, a Palestinian home in Orif village, south of the northern West Bank city of Nablus.

Adel al-Amer, the Secretary of Orif Village Council, said the Israeli assailants hurled stones at the home of Nihad Najeh Abdul-Fattah, causing damage to the windows of the property.

He added that the attack came just a few hours after colonialist settlers, from Yitzhar illegal colony, invaded Einabus village, south of Nablus, before the locals intercepted them and managed to force them away.

On Monday evening, Israeli soldiers invaded Nablus city, and shot at least two young men, one seriously, during protests that took place after the soldiers invaded the Dahia area, in the eastern part of the city.