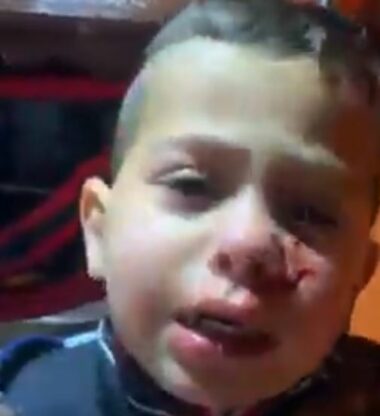 Several fanatic illegal Israeli colonists attacked, on Thursday evening, many Palestinian cars near the central West Bank city of Ramallah, causing damage and injuring a child in the face.

Media sources said the colonists injured Jad Ala’ Sawafta, 3, in the face after hurling stones at the family’s car while his father was driving near the entrance of Burqa village, northeast of Ramallah.

The father stated that he, and his family, visited Ramallah and were driving back to their home in Tubas, in northeastern West Bank.

He added that his child was injured in the face before Palestinian medics rushed him to a hospital in Ramallah.

The attack led to excessive damage to the family’s car, mainly to the front windshield and side windows.

In related news, Israeli colonists hurled stones at Palestinian cars on the bypass road near Teqoua’ town, east of Bethlehem, causing damage, and closed Etzion Junction, south of the city.