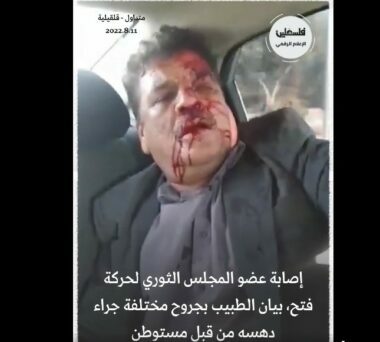 On Thursday evening, A senior Palestinian official was injured after being rammed by an illegal Israeli colonizer who fled the scene during a nonviolent procession near Ezbet at-Tabib village, east of Qalqilia, in the northern part of the occupied West Bank.

Media sources said the Palestinian a member of Fateh Revolutionary Council, Bayan at-Tabib, was participating in a nonviolent procession attended by hundreds of Palestinians, condemning the ongoing Israeli escalation and aggression against the Palestinian people.

They added that a colonizer, who was driving in the area, deliberately drove into the crowd of protesters and rammed Bayan before speeding away.

Rafe’ Rawajba, the governor of Qalqilia, denounced the attack and said that Israel and its occupation army are providing free reign and protection to the illegal colonizers to continue and escalate their crimes against the indigenous Palestinian people, their homes, lands, and their holy sites.

“In Israel, spilling more Palestinian blood became a winning ticket for those leaders and politicians trying to win the election,” Rawajba said, “That is why they escalate and commit more crimes; they are seeking to win the votes of fundamentalists and fanatics. The world must stand by our people in their struggle for liberty, justice, and independence.”