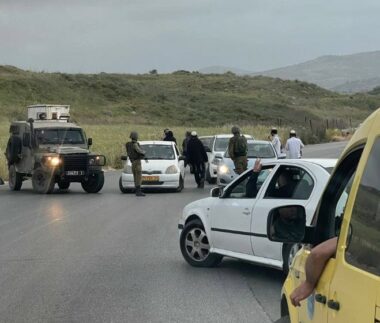 On Thursday, illegal Israeli colonizers closed the main Jenin-Nablus Road in the northern part of the occupied West Bank.

Media sources said dozens of colonizers gathered on the main road near the Silat ath-Thaher town and closed it.

They added that the hundreds of cars were stuck on the main road for a few hours while the colonizers chanted anti-Palestinian slogans and ordered the Palestinians to leave.

The colonizers then invaded the site of the evacuated Homseh colony, south of Jenin, accompanied by dozens of soldiers.

In related news, more than five hundred Israeli colonizers invaded Solomon Pools between the towns of Al-Khader and Artas, south of Bethlehem, after Israeli soldiers surrounded and closed the entire area to prevent the Palestinians from reaching it.