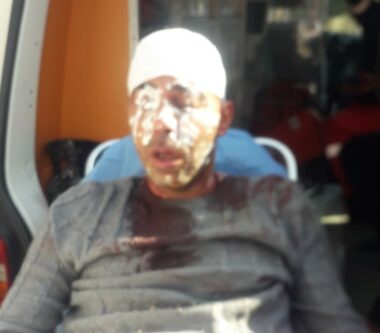 Ghassan Daghlas, a Palestinian official who monitors Israel’s illegal colonialist activities in northern West Bank, said the colonizers assaulted Palestinian farmers on their lands near the main Jenin-Nablus road, and hurled stones at them.

Daghlas added that one Palestinian, identified as Nasser Hijja, suffered an injury to his face after a colonizer hurled a stone at him.

Another, Palestinian, identified as Mohsin Sari, was injured in the head by a stone hurled by one of the colonizers, while Shadi Abu Omar suffered cuts and bruises.

The colonizers also hurled stones at many Palestinian cars, causing damage to four without leading to further injuries.

It is worth mentioning that the colonizers have recently escalated their violations against the Palestinians, driving on the main Jenin-Nablus roads, in addition to numerous assaults targeting farmers and shepherds in Burqa, Sielet ath-Thaher, and al-Fandaqumiya, especially on lands close to the Homesh former colony which was evacuated in the year 2005.