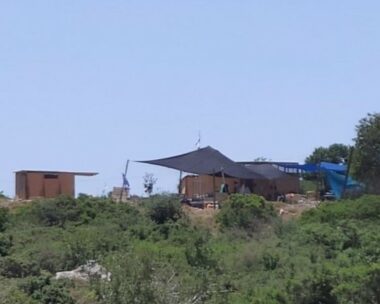 Israeli colonizers, illegally squatting on stolen Palestinian lands, installed an outpost and expanded another, Sunday, in Khirbat Zannouta Palestinian village, south of Hebron, in the southern part of the occupied West Bank.

Media sources said the colonizers brought mobile homes and started installing structures on lands, owned by the Palestinians from the families of Samamra, Abu Sharkh, and Jabarin.

Fayez at-Till, the head of Zannouta Village Council, stated that dozens of colonists invaded the Palestinian lands, accompanied by many soldiers, and installed the outpost on twenty Dunams.

He added that the colonizers installed twenty mobile homes on the lands, near the illegal “Regional Council of Settlements,” in the southern area of Hebron.

The colonizers also expanded another illegal outpost, which was installed on nearby stolen Palestinian lands, owned by Abu Sharkh and Jabarin families.

“This is a profoundly serious escalation especially since it paves the way for the illegal annexation of hundreds of dunams of Palestinian lands in the area,” at-Till said, “It is all part of a plan by the Regional Council to expand the Industrial Zone and link the several colonies in the area with each other.”