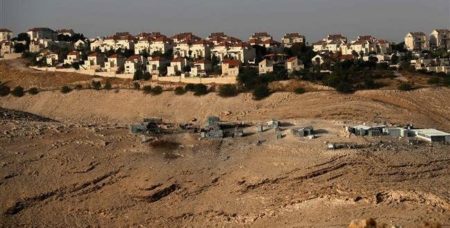 The National Bureau for Defending Land and Resisting Settlements stated, in its latest weekly report, that the Israeli government still ignores the international community’s stance, along with resolutions of international legitimacy which consider Israeli settlements a war crime. Israel acts as a state above the law, as a result of the American support that considers settlements in the occupied West Bank as legitimate, and does not contradict with international law. Furthermore, the United States is expected to firmly oppose the opening of the International Criminal Court an investigation into war crimes committed by Israel in the Palestinian territories.

Within this context, Israeli Prime Minister Benjamin Netanyahu stated that he would achieve more historical accomplishments, in the coming years, if he wins the upcoming elections. Netanyahu put forth a plan of 6 points that includes setting final borders for the occupying state, pushing the United States to recognize Israeli sovereignty over the Jordan Valley and the northern Dead Sea, and exerting pressure on the United States to recognize Israeli sovereignty over all settlements in the West Bank, without exception. It was noted that the joint Israeli ministerial team will meet to discuss the annexation of the above-mentioned areas, early next week.

The American administration’s stance has encouraged the Israeli government and settlement societies to escalate settlement construction in the occupied West Bank, including Jerusalem. The pace of settlement expansion, in the year 2019, increased by 70% over 2018. The number of settlement units submitted for approval, during the past year, amounted to about 10,000 settlement units, compared to 6,800 over the last two years, at a time when the occupation authorities demolished some 617 buildings in the West Bank and East Jerusalem, over the year 2019, which led to the displacement of 898 Palestinian families.

In Qalqilia, Israeli occupation forces bulldozed lands in Izbat Wadi al-Basha, to the south of the city, in order to open a road that serves the Alf Manashe settlement, which has been built on Palestinian lands since 1981, and is expanded annually at their expense. Furthermore, the so-called “Civil Administration” announced the confiscation of 165 dunams from Qalqilia lands, in favor of the above-mentioned bypass road and the “El-Yahoo” checkpoint.

In Jerusalem, Israeli settlement societies have established a biblical museum of three floors with an area of ​​1390m2 in the Al-Ein Al-Fawqa area of ​​Silwan, meters away from Al-Aqsa Mosque, on the southern side, with the aim of promoting it from an allegedly Jewish historical perspective, at the expense of the Christian/Islamic version.

To further challenge the feelings of the Palestinian people in Hebron, Israeli Minister of Defense Naftali Bennett stormed Al-Ibrahimi Mosque, in conjunction with the Hanukkah lighting ceremony. He was accompanied by Israeli commander Itamar Bin Haiem, the head of the “Kiryat Arba” settlement bloc, Eliyahu Liebman, and the head of the religious school, Hanniel Atruj.  During the raid, Bennett said that he couldn’t think of a better place than Hebron to light the last Hanukkah candle.

In a dangerous development, the occupation municipality in Jerusalem approved the establishment of educational institutions affiliated to the Israeli occupation instead of the UNRWA’s schools in Jerusalem. The occupation municipality began this strong step with support from both the Israeli government and the American administration. against the UNRWA, to prevent its activities and presence, there, by the beginning of 2020, arguing that it prolongs the issue of Palestinian refugees.