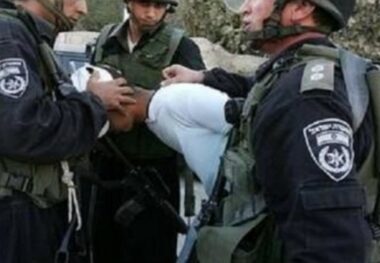 Updated: Israeli forces abducted, on Tuesday, at least 22 Palestinians from various areas in the occupied West Bank, and one in Gaza, the Palestinian News & Information Agency (WAFA) reported.

The soldiers also assaulted a young man near the Sahera Gate, in Jerusalem, causing several injuries, before abducting him.

In the northern West Bank, east of Nablus city, soldiers shot and killed a Palestinian child, injured three young men, and abducted one young man, identified as Ammar Arafat, after storming and ransacking his home.

In the northern occupied West Bank, in the Jenin governorate, Israeli forces abducted eight young Palestinian men including former prisoners after invading and searching many homes, in addition to causing dozens of young men to suffer the effects of teargas inhalation.

In the central West Bank, the army abducted five Palestinian civilians from the city of Salfit, and three from Ramallah city after invading their family homes

The soldiers also abducted one Palestinian civilian from the Bethlehem area, south of Jerusalem

In Hebron, in the southern part of the West Bank, the soldiers abducted Da’san Amer Ja’bari, and his sons Mohammad and Omayya, in addition to Mohammad Tareq Ja’bari.

In the Gaza Strip, the soldiers abducted a young man, in his twenties, on Palestinian lands near the perimeter fence east of Jabalia, in the northern part of the Gaza Strip.

Some of the abducted have been identified as: