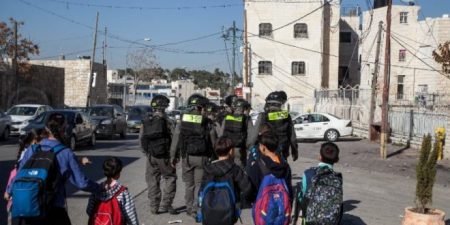 Israeli soldiers, on Monday morning, raided a Palestinian school in annexed East Jerusalem, looking for “stone-throwers”, and summoned its headmaster for police interrogation.

According to the Wadi Hilweh Information Center in Silwan, soldiers broke into the school, located in Ras Al-Armud, looking for stone throwers, and then showered the school with random barrages of rubber-coated metal bullets and sound bombs.

However, no injuries were reported in the assault, according to the PNN.

Secretary of the parental committee of Silwan town, Issam Abbasi, condemned the attack, saying that soldiers spread in the schools street, which contains 9 schools and kindergartens and schools over 5,000 children of all ages, and declared that the army is preventing them from enjoyinging a normal, safe schooling environment, Silwanic reported.

He added that the soldiers often search the students and write tickets to cars, so as to cause traffic delays and stall children from reaching their classes.