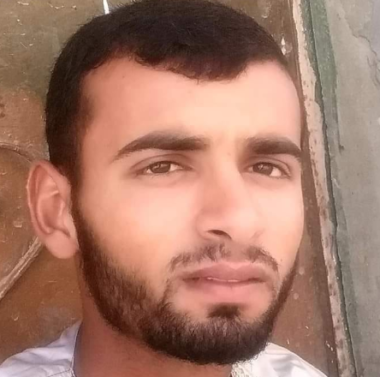 A young man from Gaza was shot dead before dawn on Thursday by Israeli troops after he allegedly crossed the border between Gaza and Israel. Israeli forces claim that the young man fired a gun at Israeli soldiers before they fired numerous live rounds, killing him.

The Palestinian was later identified as Hani Abu Salah. According to a statement issued by the Israeli army, the young man came across the border and clashed with the soldiers.

It is worth mentioning that Hani is the brother of Fadi Abu Salah, 20, who was killed by the Israeli army during on May 14, 2018. He was a wheelchair user who lost both of his legs during the Israeli war on Gaza in 2008.

According to the military, one officer sustained a moderate injury, and two other soldiers were slightly injured, and were transferred to the “Soroka” Hospital in Beer Sheva.

The Israeli army also announced that in the aftermath of this killing, they decided to begin firing tank shells toward the Palestinian city of Khan Younis, in the southern Gaza Strip, which led to exchanges of fire with Palestinian fighters in which no injuries were reported.

Eyewitnesses in Gaza reported that the Israeli occupation army fired two shells and light bombs at the border area east of Khuza’a town in Khan Younis after hearing the sound of gunfire. Others also spoke of Israeli planes flying in the area .

The protests have called for an end to the 12-year long siege of the Gaza Strip, and a return of the Palestinian refugees to their homes in what is now Israel.