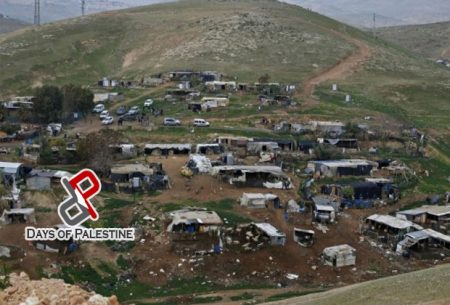 According to the report by Israeli Channel 12 news, the Israeli government has drawn up a new plan aimed at evacuating the village of Khan al-Ahmar, east of occupied Jerusalem, and forcibly displacing its residents during the coming period.

The plan calls for the evacuation of Khan al-Ahmar and the rebuilding of the village later in a neighboring area about 3 kilometers from the original site of the village, and the transfer of the residents to this new location.

But now, the newly-revealed report shows, the Israeli government has re-launched plans to displace the village and all of its residents.

The Channel 12 report indicated that the new plan was discussed in the corridors of the Israeli cabinet, between members of the National Security Council affiliated with the office of Prime Minister Naftali Bennett.

The new plan comes ahead of the session of the Israeli High Court, which is scheduled to hear the case of Khan al-Ahmar on March 6th. The residents had requested to postpone the eviction and displacement from their homes.

The Israeli authorities claim that the village of Khan al-Ahmar is built on what is called “state land”, and that it was built without a permit.

On September 29, the so-called “Israeli Supreme Court” agreed to postpone the deportation and eviction of the residents of the village of Khan al-Ahmar for an additional six months, in light of the continued pressure of the international community.

The village of Khan al-Ahmar is surrounded by a number of Israeli colonial settlements, and is located within the lands targeted by the Israeli occupation to implement its “E1” settlement project.

About 200 Palestinians live in the village, 53% of whom are children, and 95% of whom are refugees registered with the United Nations Relief and Works Agency for Palestine Refugees (UNRWA). The land in question also houses a school serving 170 students, from several places in the area.

In May 2018, the occupation authorities decided to demolish the village and displace its residents, but that attempt failed because of the steadfast, nonviolent resistance of the villagers, and also because of a decision issued by the International Criminal Court, which warned the Israeli government against displacing or demolishing the village and the surrounding communities in the area called ‘E1’.

It is noteworthy that the implementation of the process of displacing and demolishing the residents of the village of Khan al-Ahmar would pave the way for the establishment of settlement projects isolating occupied Jerusalem from its surroundings, and dividing the West Bank into two parts.