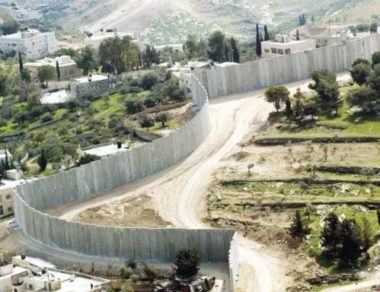 The Israeli High Court has granted its approval for the demolition of 16 apartment buildings of 100 flats in Wadi al-Hummus neighborhood in Sur Baher village, south of occupied East Jerusalem, for “being built close to the Annexation Wall.”

The court upheld allegations by the military in which it claimed that the buildings are close to the Annexation Wall, and “pose a security threat,” due to their proximity to the illegal wall.

The Palestinians were ordered to demolish the apartments by July 18th, or face very high fines and fees, in addition to the demolition costs, should the Jerusalem City Council demolish their buildings.

Khalil Tafakji, the head of the Maps Department of the Arab Studies Society in occupied Jerusalem, said Wadi al-Hummus is in Area A of the West Bank, supposedly under the full control of the Palestinian Authority as per the Oslo Accords.

Tafakji added that when Israel started the construction of the illegal Annexation Wall in 2003, Sur Baher residents filed appeals against the planned route of the wall, as it passes right through the center of the village.

Israel then adjusted the route, keeping the entire neighborhood inside the boundaries of the wall, instead of being isolated from Jerusalem, or split in half.

He also stated that, since the neighborhood was considered to be in Area A, the Palestinians obtained construction permits from the Palestinian Ministry of Local Government.

In addition, Tafakji said that the Israeli High Court based its decision on an order, issued seven years ago by the military commander in the area, preventing the Palestinians from constructing in any area that is less than 250 meters from the Annexation Wall.

“What is happening in Sur Baher is similar to what Israel is trying to implement in the Shayyah area, in the al-Ezariyya town, and all other Palestinian communities around occupied Jerusalem,” Tafakji stated, “All these resolutions are demographic in nature, only aim at removing the Palestinians from Jerusalem.”

There are around 6000 Palestinians living in Wadi al-Hummus neighborhood, who now all face displacement, especially after the court only granted them one month to demolish their buildings.

On his part, Attorney Haitham Khatib, the head of the Legal Department of The Catholic Center for Human Rights, Sr. Yves, said the Israeli court completely adopted the allegation of the Israeli military in its ruling, which violates the basic rights of the Palestinian people.

Khatib added that this ruling is very serious, as it could also be implemented in all Palestinian areas, where the Wall was built near them, across the West Bank, and not only in Jerusalem.

He also said that, in 2011, the Military Commander in the occupied West Bank, issued an order denying the Palestinians the right to build in any area within 250 meters from the Wall, and added that, although the decision remained active, it was never implemented.

However, in the year 2018, the Israeli army decided to implement the ruling, and started by handing demolition orders targeting 16 apartment buildings in Wadi al-Hummus neighborhood.

“This is a very serious violation of the Palestinians rights; this ruling is a green light for the demolition of hundreds of homes in all Palestinian communities and neighborhoods where Israel built Annexation Wall close to them,” Khatib said.

On his part, the Palestinian Minister for Jerusalem Affairs Fadi al-Hidmi, said that the Ministry’s Legal Department is following this issue, in cooperation with the Foreign Affairs Ministry, especially since these orders are serious violations not only of basic Palestinian rights, but also of International Law, International Humanitarian Law and the Fourth Geneva Conventions.

“The International Community must end is silence and uphold its responsibilities in protecting the Palestinian people from the Israeli apartheid policies,” al-Hidmi stated, “We will continue to defend our people, our existence in Jerusalem, and we will counter these racist policies and rulings.”

A report by the “Colonization & Wall Resistance Commission” has revealed that, last year, Israel demolished 471 Palestinian buildings, and issued orders for the destruction of an additional 546 structures, including 50 schools.

The report said that, although the demotions were mainly carried out in and around occupied East Jerusalem, they also included many areas in other parts of the West Bank.