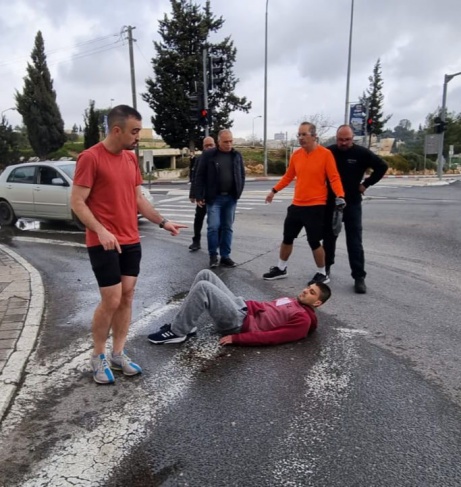 Israeli police shot, on Saturday, a young Palestinian man, critically injuring him after he allegedly stabbed and injured an illegal Israeli settler near the Old City of Occupied Jerusalem, local sources reported.

Update: The Palestinian, 23, from Ras al-Amoud in Jerusalem; his brother told al-Arab News Agency that the family has been trying to get him treatment and rehabilitation for his addiction to drugs.

His brother said that the incident has nothing to do with the occupation and the ongoing conflict, but some Israeli media agencies and the police are trying to claim so.

He added that his brother even burnt his own car earlier.

It added that police shot the young Palestinian man at the “Al-Thawri neighborhood” junction in Jerusalem before he was transferred to a nearby hospital with critical injuries.

At least eight Israeli police officers can be seen in the video, proving that they had the opportunity to overpower the unarmed young man and take him into custody, without using lethal force.

The unidentified young man can be seen in the videos to be unarmed and posing no threat when police opened fire at him before he is seen falling to the ground.

Under Article 49 of the Fourth Geneva Convention, it is illegal for the occupier (Israel) to transfer its own population on to the land on which it occupies (Palestine), therefore, all settlements in occupied Jerusalem and the remainder of the Palestinian territories are illegal.

“The Occupying Power shall not deport or transfer parts of its own civilian population into the territory it occupies.
– Article 49 of the Fourth Geneva Convention“

The state of Israel was founded in 1948 after forcing more than 750,000 Palestinians out of their land, and in 1967 Israel occupied the West Bank and the Gaza Strip.

In the recent past, Israeli forces have killed two Palestinians, including a child, in the occupied West Bank, with no justification or accountability.
| Israeli Army Kills Palestinian Young Man Near Jerusalem |