Israeli Security Guard Killed In A Shooting Attack In Ariel 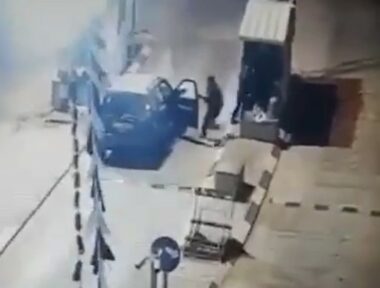 Update: Israeli sources have confirmed that the security guard was officially identified as Vyacheslav Golev, 23, adding that he moved to live with his fiancé in Ariel just a few weeks prior to the shooting.

They added that Golev, from Bet Shemesh, who also studied at Ariel University, got engaged a few weeks before the fatal shooting. Israeli sources have reported, late Friday night, that a security guard at the Ariel illegal colony in the occupied West Bank was shot dead by Palestinian fighters who managed to escape unharmed. As a result, the army and internal security initiated a massive search campaign.

The sources said the shooting was conducted with an improvised Carl Gustave submachine gun, adding that the guard is 23 years of age.

Israeli Ynet News said video footage from the scene of the fatal shooting shows two persons stepping out of a car before running up to the guard and shooting him.

One of the shooters returned to the car, made a U-turn, and picked up the other person before speeding away, Ynet added.

Israeli medics said they tried first aid after arriving at the scene, but the guard had no pulse and wasn’t breathing before they pronounced him dead due to his serious wounds.

A few hours after the shooting, the Israeli army closed the iron gate near Qarawat Bani Hasan town, on the main road leading to villages and towns west of Salfit, and prevented the Palestinians from crossing. The soldiers briefly detained and interrogated dozens of Palestinians and searched many cars.

The army said it found a burnt car believed to be used in the fatal shooting.

The army invaded and ransacked many Palestinian homes and shops on Kafr Thuluth, Beit Amin, and Sanniriya, near Qalqilia, during the ongoing search for the shooters and confiscated surveillance recordings and equipment.