Updated: “Israeli Colonist Kills Palestinian Woman In A Hit And Run Near Ramallah” 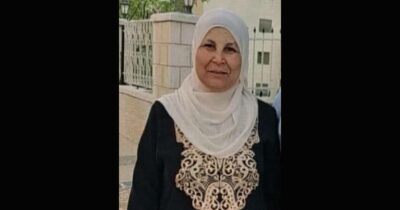 An illegal Israeli colonist struck with his vehicle, on Friday, an elderly Palestinian woman, killing her instantly, near the entrance of the town of Sinjil, northeast of Ramallah in the central occupied West Bank.

The Mayor of Sinjil, Hazem Tawafsha, stated that the victim, identified as Ghadir Anis Abdullah Masalma, 63, was standing with her husband at the entrance to the town, near the settler-only bypass Road 60 when she was killed.

The slain Palestinian woman was from Sinjel town, northeast of Ramallah.

Five years ago, Ghadeer won her battle with cancer.

“I am stronger than cancer,” she used to say according to family.

Her husband, Saleh Abu Hamada, 67, said the Israeli colonizers rammed his wife with the car and fled the scene.

“He didn’t stop, he didn’t slow down, he just rammed her with his car, and sped away,” the husband stated, “We were just heading back home.”

“She was always very socially active, loves to be around people and her family. Her heart was always loving and caring,” her niece, Zahra said, “She was a loving mother to everybody who knew her.

In related news, Israeli colonizers attacked and injured three Palestinians while working on their lands in the Wadi Qana area, in Deir Istiya town, west of Salfit in the central West Bank.

Two of the Palestinians have been identified as Mohammad Rayyan and Yassin Rayyan, from Qarawat Bani Hassan town.

Many farmers, who were working on their lands in the area, rushed to the aid of the Palestinians and managed to force the colonizers away.