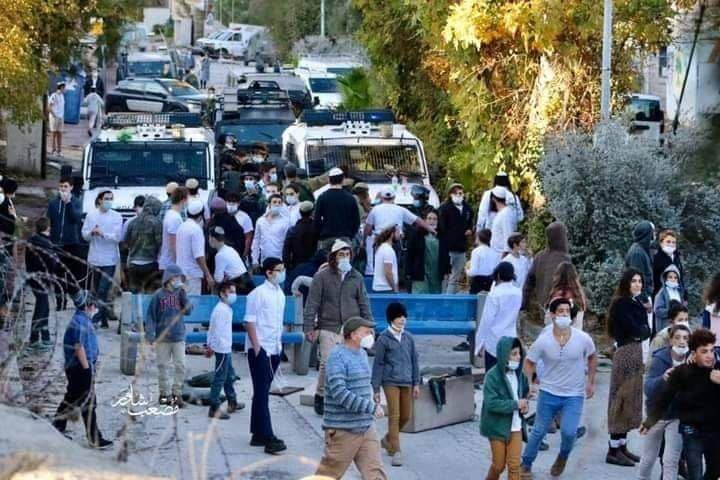 A large crowd of illegal Israeli settlers, on Saturday, under the protection of occupation soldiers, led an
assault on Palestinian civilians in the southern West Bank city of Hebron.

Meanwhile, in Masafer Yatta, south of Hebron, a number of Palestinian farmers and shepherds were injured, Saturday, when illegal Israeli colonists assaulted them, resulting in injuries.

From the Wall and Settlements Resistance Committee, Rateb al-Jabour told WAFA that settlers from the two colonies, Mitzpe Yair and Susya, attacked Palestinian civilians near Khirbet al-Batm and Sussia hamlets.

Daraghmeh said that a group of colonists, likely from the settlement of Ma’ale Levona, invaded his plot of land, and damaged his water pipes, doors, and orange trees.

Furthermore, another settler assault occurred in the Masafer Yatta region, in the southern West Bank, when Israeli colonists invaded Palestinian-owned homes, while assaulting the inhabitants.

Local activist, Fuad al-Amour, Coordinator of the Protection and Steadfastness Committee, stated that a group of armed settlers, under army protection, broke into and ransacked a number of homes in the al-Markez community.

Palestinian home owners attempted to stop the incursion, the settlers assaulted them.

Hardcore #Israeli settlers and occupation forces break into the neighborhood of Tal Rumeida in the city of #Hebron,…