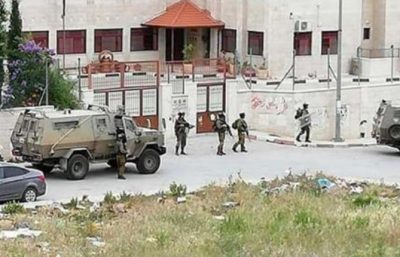 Dozens of Israeli soldiers invaded, earlier on Monday morning, the office of Hebron Governorate in the Old City, in southern West Bank, and several surrounding homes, before searching them, and installed roadblocks. The soldiers also abducted one Palestinian and detained seven others.

Media sources in Hebron said the soldiers stormed the governorate’s office in the Old City, and violently searched it, causing damage.

They added that the soldiers also stormed and ransacked several surrounding homes, owned by members of Eada and al-Mohtaseb families.

In addition, the soldiers invaded many neighborhoods in Hebron city, and installed roadblocks at Hebron’s northern entrance in Jouret Bahlas area, in addition to the main entrances of Beit Awwa and Sa’ir nearby towns.

The soldiers stopped and searched dozens of cars, and interrogated many Palestinians, while inspecting their ID cards.

Furthermore, the soldiers installed a roadblock at the entrance of Zeef village, near Hebron, and abducted one Palestinian, identified as Ra’fat Mosallam ‘Ashour, 31, from Hebron city.

The soldiers also briefly detained seven Palestinians, in Hebron city, after stopping them at a sudden military roadblock.

The seven residents were cuffed, while the soldiers examined their ID cards, and interrogated them for several hours.

On Monday at dawn, the soldiers abducted seven Palestinians from their homes, in the northern West Bank governorates of Tulkarem and Jenin, and confiscated several mobile phones and laptops.