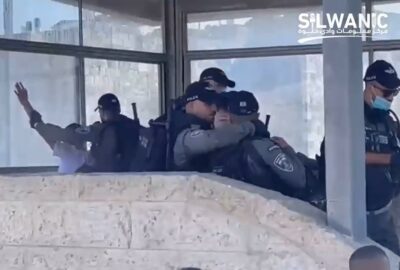 Israeli soldiers abducted, on Saturday, eight Palestinians from their homes in several parts of the occupied West Bank. The soldiers also detained and assaulted three young men in occupied Jerusalem, before releasing them.

Several army jeeps invaded the al-Jalazoun refugee camp, north of the central West Bank city of Ramallah, and abducted a young man, identified as Mohammad ash-Shanni, before moving him to an unknown destination.

In Birzeit town, north of Ramallah, the soldiers abducted Mohammad Omar Barghouthi from his home.

In addition, the soldiers invaded Nablus, in northern West Bank, and abducted a young man, identified as Yazan Ahmad Snobar, 22, after shooting him in the arm, in an area close to the Za’atra military roadblock.

In Hebron, in southern West Bank, the soldiers abducted a young man, identified as Marwan Mofeed Sharabati, from the center of the city, and assaulted several Palestinians, causing injuries.

In occupied Jerusalem, the soldiers detained three young men in Bab al-‘Amoud area and took them to a monitoring room in the area where they assaulted and searched them, before releasing them, the Wadi Hilweh Information Center in Silwan (Silwanic) said.