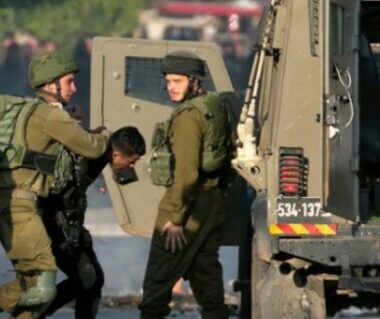 On Thursday evening, Israeli soldiers abducted eight Palestinians, including six children, in Hebron and Jerusalem, in the occupied West bank.

In Hebron, in the southern part of the West Bank, the soldiers invaded an area near Ein ad-Dabla at the entrance of the al-Fawwar refugee camp, southwest of Hebron, and abducted three Palestinian children, identified as Yousef Azmi Ghatasha, Ayman Ghatasha, and Tawfiq Rami Wawi.

The soldiers took the abducted children to the fortified military tower at the main entrance of the refugee camp before moving them to an interrogation center.

The soldiers also assaulted and injured two young men near a military roadblock in the al-Thaheriyya town, south of Hebron, and abducted them.

Also, the soldiers abducted three children, Mohammad Qous, Ja’far Bashiti, and Abdullah Hashlamoun, from the courtyards of the Al-Aqsa Mosque in occupied Jerusalem, in the West Bank.