Israeli Soldiers Abduct Seven Palestinians, Including One Whom They Shot, In West Bank 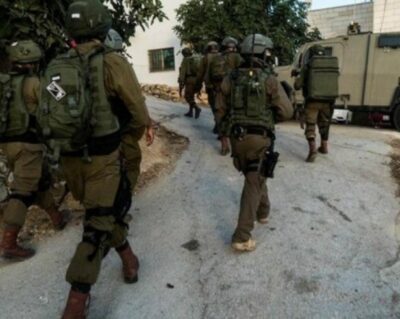 On Sunday dawn, Israeli soldiers abducted seven Palestinians, including a young man they shot, and injured another Palestinian, in several parts of the occupied West Bank.

In the southern part of the West Bank in Hebron, the soldiers abducted four Palestinians, including one whom they shot before abducting him.

Media sources said the soldiers invaded the Zeev area, east of Yatta town, south of Hebron, leading to protests before shooting Mohammad Awwad Al-Jondi, 21, with a live round in the leg and abducting him.

During the invasion, the soldiers stormed and ransacked several homes before abducting Hisham Khader Abed-Rabbo and his son, Morad.

In Hebron city, the soldiers abducted Wasim Hussin Ja’bari, 22, after invading his home and violently searching it.

In Tubas, in the northeastern West Bank, the soldiers abducted Jom’a Hakam Kharraz, 18, after invading his family’s home and ransacking it.

Wisam’s father said the soldiers ransacked the property, stole 300 Shekels, and assaulted the family, wounding one of his sons before Palestinian medics rushed him to a hospital.

Also, an Israeli military jeep capsized during an invasion of an area near Salfit in the central West Bank; four soldiers were injured.

In related news, the Palestinian Ministry of Health announced the death of Mujahed Ahmad Mohammad Daoud, 31, as a result of critical wounds he sustained when the invading Israeli soldiers shot him with live fire in the chest near Salfit.

In related news, illegal paramilitary Israeli colonizers invaded a Palestinian school in Orif village, south of Nablus in the northern part of the occupied West Bank, before causing serious damage and burning the administration room.

In the Gaza Strip, Israeli navy ships fired many live rounds at Palestinian fishing boats near the shore of Khan Younis, forcing them to leave.