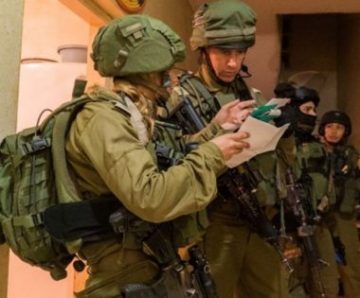 Israeli soldiers abducted, on Wednesday at dawn, at least twelve Palestinians, including two teenagers, in various parts of the occupied West Bank, the Palestinian Prisoners’ Society (PPS) has reported.

The soldiers also invaded and ransacked the home of Ahmad Khaled Abu Hashem, 50, causing excessive damage, and summoned him for interrogation in Etzion military base, north of Hebron.

Furthermore, the Israeli army claimed the soldiers arrested what it called “two Hamas operatives,” in Hebron city, and one Palestinian in Beit Ola town, northwest of Hebron. One of the abducted Palestinians have been identified as Mustafa Obeido.

In occupied Jerusalem, the soldiers abducted one Palestinian, who remained unidentified until the time of this report, in Bir Nibala town, in addition to Tawfiq Khalil Affana, from Abu Dis town, Khalil Dandan and Maher Affana, from different parts of the city.

According to a statement by the Israeli military, the soldiers located a weapon and ammunition during an invasion and search campaign in Thannaba area, in the northern West Bank governorate of Tulkarem.