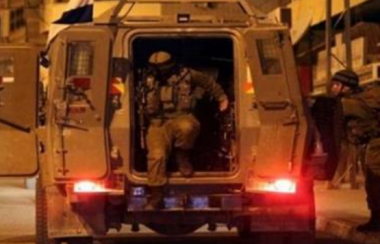 The sources added that the soldiers also abducted Khader Mohammad Dalo, from al-Maslakh area, in the center of Bethlehem city.

The invasions led to clashes between the soldiers and many local youngsters, who hurled stones at the military jeeps, while the soldiers fire live rounds.

Furthermore, the soldiers installed many roadblocks in Jenin governorate, especially on Jenin-Jaffa road, and the entrances of Arraba, Ya’bad and Qabatia towns, before stopping and searching dozens of cars, and interrogated many Palestinians after detaining them.

It is worth mentioning that the Dotan military roadblock near Jenin remains closed by the soldiers for the fifth consecutive day, from 9 in the evening until four at dawn, preventing thousands of Palestinians, including students, workers, merchants, and medical professionals, from freely moving to and from many communities in Jenin and Tulkarem.