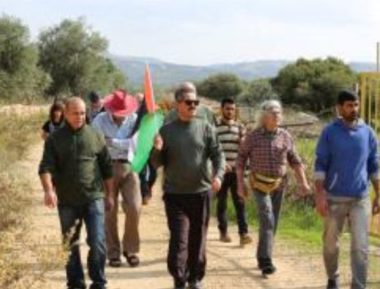 The protesters marched from the center of the village, carrying Palestinian flags, and chanting for liberation, independence, the release of all detainees and the Right of Return to all refugees.

They called for ongoing popular resistance against the illegal Israeli colonialist occupation and policies in Palestine, and for ensuring the implementation of all United Nations and Security Council resolutions, affirming the legitimate rights of the Palestinian people.

Many Israeli and international peace activists participated in the procession, and marched with the Palestinians in the village.

It added that some protesters managed to raise the Palestinian flag on the gate, and several others banged on it with stones.