Israeli Soldiers Cause Damage To Homes, Youth Institute, In Ramallah 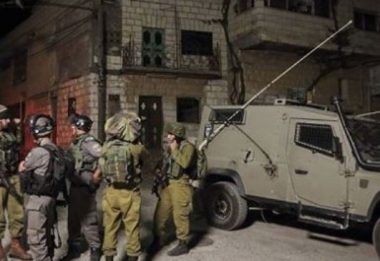 Dozens of Israeli soldiers invaded and violently searched, on Monday at dawn, many homes, and a Youth Institute, in the al-Jalazoun refugee camp, north of the central West Bank city of Ramallah.

The WAFA Palestinian News Agency has reported that the soldiers carried out one of the largest, and most violent, invasions into the refugee camp in recent months, and added that the soldiers stormed and ransacked many homes, in addition to using rooftops as monitoring towers.

It said the soldiers interrogated many Palestinians while inspecting their ID cards, during the violent searches of their homes.

Some of the Palestinians have been identified as Adnan Hattab, Zoheir Samadna, Fahmi Abu Sbeih, Abdul-Naser Nakhla, Mahmoud Sheikh and Mohammad Oleyyan.

Furthermore, the soldiers surrounded and invaded “Khaled Bakir Institute for Young Leadership,” causing serious damage, and briefly detained one of its members, identified as Mohammad Dohan.

It is worth mentioning that the soldiers abducted, on Monday at dawn, at least fourteen Palestinians