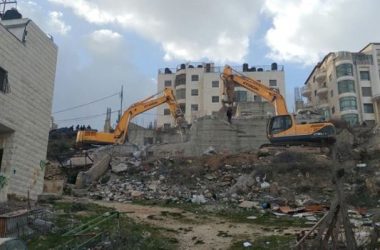 Israeli soldiers invaded, on Wednesday morning, Beit Hanina neighborhood, north of occupied East Jerusalem, and demolished an under-construction residential building, under the allegation of being built without a permit.

The Wadi Hilweh Information Center in Silwan (Silwanic) has reported that the soldiers, accompanied by bulldozers and employee of the Jerusalem City Council, invaded Tal al-Fool area, in Beit Hanina, and surrounding the building, before starting to demolish it.

It added that the building was built several years ago, but an Israeli order forced the work stopped since then, before the Jerusalem City Council ordered its demolition.