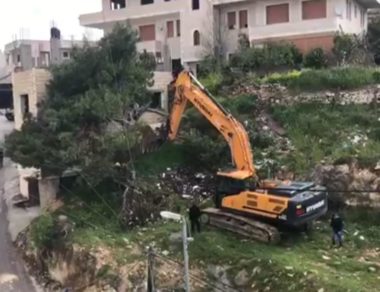 Hasan Breijiyya, the head of the office of the “Colonization& Wall Resistance Commission” in Bethlehem, said a large military force invaded the area, before the bulldozers demolished the home.

He added that the soldiers closed the entire area, and prevented the Palestinians from entering or leaving it, before demolishing the property.

The demolished property is owned by a lawyer, identified as Basima Issa, and was a three-story building; the Israeli army claimed that the home was built without a permit from the Israeli “Civil Administration Office,” which is run by the Israeli army in the occupied West Bank.

Breijiyya stated that the area has been subject to frequent Israeli violations, including the demolition of homes and other structures, as Israel is trying to illegally annex it for the construction and expansion of its colonies, built in occupied Palestine in direct violation of International Law