Video: Israeli Soldiers Demolish A Store, Stable And A Room In Jerusalem 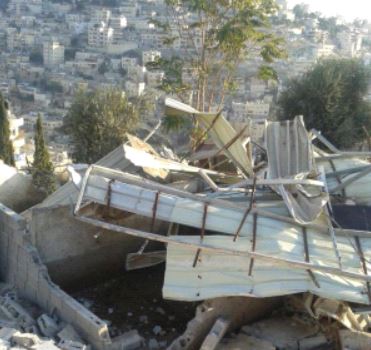 Israeli soldiers demolished, on Tuesday at dawn, a store in Jabal al-Mokabber, a stable for horses and a hot house, in Silwan town, in occupied East Jerusalem.

The soldiers invaded the al-Farouq area in Jabal al-Mokabber, southeast of Jerusalem, and demolished a store for what the army said “being built without a permit.”

In addition, the army invaded the ath-Thoury neighborhood, in Silwan town, south of the Al-Aqsa Mosque in Jerusalem, and demolished an agricultural hothouse, and a stable for horses, owned by Ala’ Issa Shweiki, who is also a former political prisoner.

The attacks also led to damage to nearby property, and resulted in cutting and uprooting several trees.

Shweiki told the WAFA News Agency that he never received a demolition order, and that his demolished stable was 200 square meters, built with bricks in addition to being roofed with tin plates, while the hothouse was 15 square meters.

He added that the Jerusalem city council imposed, five years ago, a 40.000 Shekels fine, and that he has been paying it regularly.