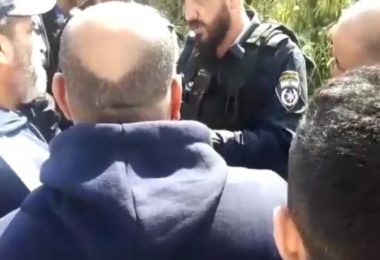 Israeli soldiers and police officers invaded, Friday, a wedding dinner party in the al-‘Isawiya village, in occupied Jerusalem, and detained the groom and his uncle.

A video published by Wadi Hilweh Information Center in Silwan (Silwanic) on its Facebook page showed many officers invading the area and detaining the groom and his uncle.

Silwanic stated that the soldiers invaded the party because of Palestinian flags that were raised there, and demanded their immediate removal.

The soldiers then detained the groom and his uncle, and took them to a police station to sign an affidavit that all Palestinian flags will be removed, and no flags will be raised, or face imprisonment and high fines.