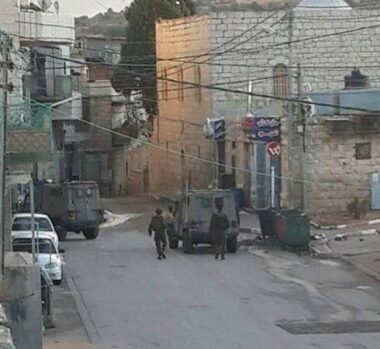 On Friday evening, Israeli soldiers injured a Palestinian child in the ‘Aida refugee camp, north of Bethlehem, in the occupied West Bank.

Media sources said the soldiers attacked Palestinian protesters who marched near the eastern entrance of the refugee camp and fired many live rounds, rubber-coated steel bullets, and gas bombs.

The sources stated that a child was injured from fragments of a rubber-coated steel bullet before Palestinian medics rushed him to a hospital in Bethlehem.

The soldiers also closed the main street near the refugee camp and prevented the Palestinians from crossing.

In related news, the soldiers invaded Rommana, Zabbouba, and Taybeh villages west of the northern West Bank city of Jenin, and were heavily deployed in many neighborhoods, before conducting massive searches.

The soldiers also invaded olive orchards in the villages of Faqqu’a and Jalboun, northeast of Jenin, and searched them.